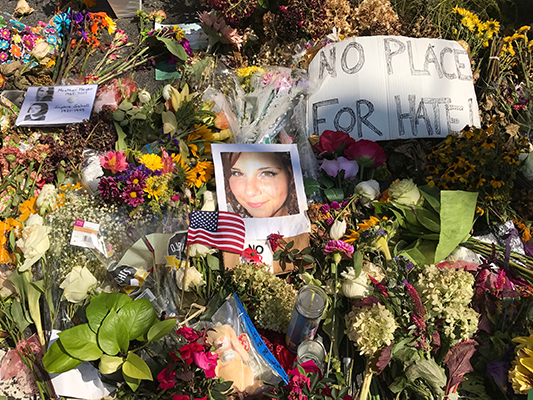 Washington (Gallant Gold Media Hill Report | Perspective | May 17, 2019) –  Monday May 13, 2019, U. S. District Judge George J. Hazel of Maryland boldly overturned U. S. Magistrate Judge Charles Day’s ruling of the preceding week and ordered USCG Lt Christopher Hasson reman in jail on weapons charges until his trial. The trial date has not yet been set.

Hasson, who faces up to 31 years in prison, is a 50 year old self-declared white nationalist, arrested on February 15, 2019, with plans to kill “nearly everyone on earth.” Hasson made a hit list of Democratic leaders, Supreme Court Justices, social media executives and top “leftist” journalists with the implication that they had to be slaughtered. Based on the material seized upon his arrest, it was determined that Hasson idolized Norway extremist Anders Behring Breivik who massacred 77 in 2011, most of whom were students. Breivik penned a 1,500 page manifesto for the purpose of inspiring other like-minded white nationalists, When arrested, Hasson was in the possession of 15 firearms and 1,000 rounds on ammunition. The initial court filing described Hasson as a “domestic terrorist” who was determined to “murder innocent civilians on a scale rarely seen in this country.”

Hasson stated in a letter to a friend that was included in the initial court filing, “I am a long time White Nationalist, having been a skinhead 30 plus years ago before my time in the military.” One of several Google searches that revealed Hasson’s intentions was the phrase “civil war if trump impeached.” 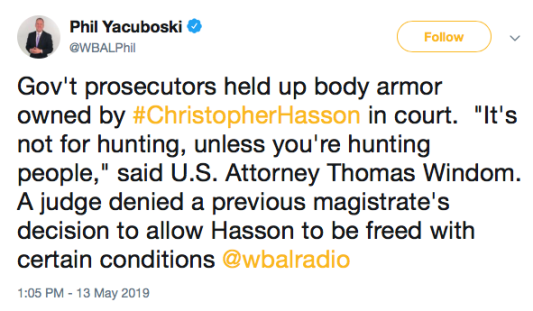 Last week on May 7, 2019, U.S. Magistrate Judge Charles Day ordered that Hasson be released until trial, despite his “grave concerns.” According to the TRIBLive, Day outlines that Hasson was to be be “released to the custody of in-laws at a home in Virginia, with 24-hour monitoring by GPS.”

Senators Dick Durbin (D-IL) & Tim Kaine (D-VA) introduced legislation on March 27, 2019 (S-894 Domestic Terrorism Prevention Act of 2019), less than two weeks after the New Zealand white nationalist massacre, to address the domestic terrorism threat. Senator Kaine acknowledged that “the rise of white supremacy is an undeniable threat to the safety of our communities.” The bill is currently in committee, waiting to be debated, although it’s not expected to move forward anytime soon due to the fact that GOP senators do not believe white nationalists are a threat.

Be on alert. If you See Something, Say Something.