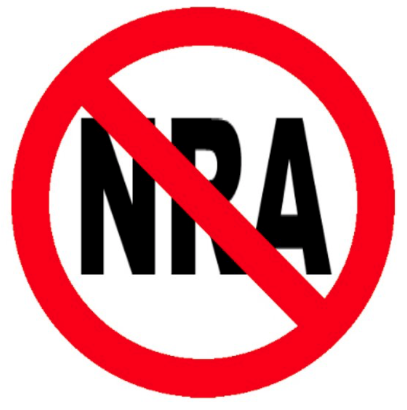 During the Age of Enlightenment, following the Dark Ages, when scholars and philosophers around the globe were desperately trying to figure out what was true, what the facts were, they began relying on the scientific method to discover truth. Francis Bacon created this “New [Scientific] Method‘ – an updated iteration of Aristotle’s “demonstration method” – in 1620. The scientific method is just as valuable and vital today in verifying what’s true as it was 400 years ago.

What is the Scientific Method:

In dealing with our President’s aversion to facts, deciphering what’s true is tricky. Factor in the lies and delusions of Trump’s inner circle and GOP supporters, and it becomes a quagmire.

Thankfully, everything in Trump’s twisted reality rests on twisted hypotheses. Both are provable using the scientific method. Becoming proficient in highlighting the flawed hypotheses, makes it much easier to throw away the entire argument.

“Has any president in American history ever needed the job less? (Yes. MOST of the presidents in American history have needed the jobs less. Trump is the one who needed it the most. It was his desperate attempt to ward off a 7th bankruptcy.) Think about it. He spent 70 years of his life becoming one of the most successful businessmen ever. (False. Trump’s willingness to “die on this hill” by refusing to turn over his tax returns, leads the public to believe that his success is in dispute. What does “success” mean anyway? Financial achievement? But if Trump’s fortune, or lack there of, was accomplished by breaking the law and committing crimes, is that success?) And not one second of those 70 years was spent as a politician. (Irrelevant.) These are supposed to be the years where he relaxes and enjoys the fruits of is hard work and success. (There are no fruits. That’s the point. This presidency was his Hail Mary Pass to keep the Trump Organization afloat.) But he gave that up for his country. (False. He didn’t give it up, and it wasn’t for his country.) And what does he get for that sacrifice? An absolutely unprecedented and savage onslaught of despicable attacks. They’re trying to destroy his reputation and even his family. And they’re willing to say and do anything it takes to make his life a living hell. (Terrifying that NRA is making this false assertion at a huge NRA event filled with White Nationalists who have declared ‘Civil War’ on all those who oppose Trump.)”

So, here we have a massive NRA event, filled with extremists, who are wrongly fed propaganda, which seems highly probable will compel them to feel it their patriotic duty to attack those who oppose Trump and who are “making his life a living hell.”

There must be a point where all these false statements with ill intent are criminal. With this fantasized introduction, followed by Trump’s continuation of warped reality, it seems clear that Trump and the NRA have crossed into criminal territory and that by doing so, they’ve fueled the domestic extremism that incites so much violence. And now, as if to prove the point, a domestic extremist has opened fire at a synagog on Passover in Poway, CA killing 1 and wounding 3, this less than 24 hours after the disturbing NRA whitewash.

The silver lining out all this darkness, is that the NRA is imploding, suffering a $64 million loss for combined 2016 & 2017 tax year. Members have fled following the link of Russia funneling money to political campaigns through the NRA. Building an organization on sand, on false hypotheses, only has one possible outcome when the thrashing storm finally rolls in. 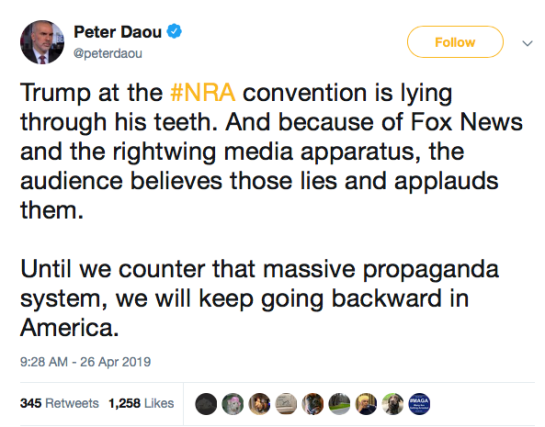