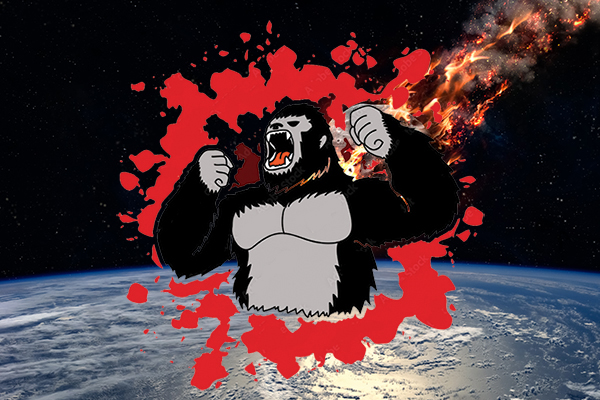 Every exceptional film deserves an afterthought once all the reviews have been written. Especially a film as controversial as Don’t Look Up with its thousand pound gorilla in the room, busy lumbering about, pounding on its chest, bashing into walls, throwing fits from time to time, and erupting right in front of our faces. You spotted the gorilla moving from scene to scene along with the exaggerated subliminal advertisements promoting biodiversity didn’t you?

If we use the size of the magnified subliminal messages as the scale by which Adam McKay (writer, producer and director) overemphasized his BOLD FACE apocalyptic warning about the dire consequences of not acting on climate change, it’s unfathomable that anyone could actually not feel motivated to act. Doing nothing after watching Don’t Look Up would be mind-blowing. In fact, it’s inconceivable that anyone could possibly log off Netflix without making a personal commitment to vote for climate candidates in 2022 election, buy an EV, call for a solar quote, finally begin composting, plant a pollinator garden, become mostly vegan, etc. McKay deftly revealed what all human beings perishing would look like if we did nothing. Clearly McKay’s ingenious experiment would prove the psychological phenomenon of Inattentional Blindness wrong, right?

Back in 1999, “The Invisible Gorilla Test” was conducted by Daniel Simons and Christopher Chabris (Simons & Chabris, 1999). Participants in a study were asked to watch a video of two teams passing basketballs. One team wore white, the other team wore black. Participants were instructed to count the number of times the white team passed the basketball. A person wearing a gorilla costume walked through the players while the teams were following through with their instructions. When participants were asked whether they saw anything out of the ordinary in the video, nearly 50 percent confirmed they had not.

Psychologists referred to this psychological phenomenon of not seeing the clearly visible gorilla in the room as inattentional blindness (also known as perceptual blindness). The participants in the study who didn’t see the gorilla were focused on something else, and thus oblivious to what others considered very obvious. Again, this is a very real psychological phenomenon. Psychologists warn of the danger in perceptual blindness and cite examples of car crashes, airplane accidents, tripping and falling while walking on a sidewalk, etc.

So, to all the negative reviewers of Don’t Look Up who are in the mainstream media, you were tagged by psychologists a few decades ago. The results of the 1999 invisible gorilla test were used to warn about the danger of perceptual blindness, both the danger to the distracted and the hazard to others. The invisible gorilla test has been very useful in getting laws passed, especially laws about holding a cellphone while driving (1.6 million crashes each year from drivers using a cell while behind the wheel). The fact that Don’t Look Up has in effect proven that it’s the mainstream media that suffers from this inattentional blindness (as revealed in their bitterly defensive reviews) has to be noted so the danger can be contained.

Adam McKay’s most ingenious spoof, though, was his clever play on James Vicary’s subliminal messaging that Vicary inserted into a movie back in 1957 when he used .003 second flashes of “Eat Popcorn” and “Drink Coca-Cola” to inspire movie-goers to spend money on concessions. McKay’s biodiversity flashes were closer to 3 seconds, so there was actually nothing subliminal about them. (Did Inception spring to mind for anyone else while watching the biodiversity hints? Not only did Leonardo DiCaprio’s brilliant performance in Inception flash before my eyes while absorbing these images, but also DiCaprio being the powerful voice that promotes rewilding.) Psychological tricks really work.

The biodiversity lightbulb should have gone off for all of us. But did it?

These are just a few of the multiple unusual twists that tie-in to Don’t Look Up that make the film seem prophetic rather than an instrument to inspire a rebellion against such a bleak prophecy. But do any of us want Don’t Look Up to be prophetic? I’m sure billions of us don’t.

The irony of McKay including a real invisible gorilla in the film isn’t lost on me.

Emotions ran wild on Twitter the week following Don’t Look Up’s debut on Netflix with it trending for several days and the hashtag still having strong daily numbers nearly two weeks later. Fossil fuel advocates were clearly behind all the negativity.

As if to prove the point that no one listens to calm, factual statements about climate, DiCaprio appeared in a powerful YouTube video that explained the film. DiCaprio’s direct, eloquent summation was the antithesis of Don’t Look Up’s satirical parody. Same urgent message, spoken by the same person, but two completely different styles, as if to prove why McKay went out on a limb to use a chest-pounding, screaming scientist to get the point across.

McKay talks about Don’t Look Up’s three endings, but aren’t there really four? I view the many mainstream media attacks and lackluster reviews of  Don’t Look Up as the fourth ending. Very similar to DiCaprio’s psych thriller Shutter Island’s twisted ending when we’re forced to come to grips with our altered reality.

It’s time to recognize that many in the mainstream media, along with the fossil fuel industry, are the metaphorical Shutter Island criminally insane psych patient. If Adam McKay’s magnified gorilla didn’t change the hearts and minds of the perceptually blind, then nothing will, except perhaps laws that force them to report daily about the crisis.

John Doerr noted in his book, Speed & Scale, An Action Plan for Solving Our Climate Crisis Now, that there is no margin for error. We’re out of time and can’t make any mistakes. Climate is not going to get better anytime soon, it’s only going to get worse. We can’t pin our carbon cutting targets on false hopes. The mainstream media has just proven through McKay’s incredible psychological experiment, what the obstacle is to our achieving our target of staying below 1.5ºC. The vast majority in the mainstream media will not help us in our mission to cut carbon 50% by 2030. Rather, they will thwart every effort that we make. So our next step has to be to create a pathway around this obstacle so we can reach our goal and save humanity.