Several large Exxon shareholders demanded that a climate proposal be included on the ballot for the 2019 annual meeting to be held on Wednesday, May 29, but Exxon failed to comply.

The Church of England, and New York State Common Retirement Fund led by Thomas DiNapoli, the New York State Comptroller, initiated a proxy fight against the Exxon directors on Friday, May 3, claiming that Exxon’s “inadequate response to climate change constitutes a serious failure of corporate governance.”

The band of pro climate action Exxon shareholders, are aligned with Climate Action 100+, a group of investors who command $32 trillion in assets and are using their strength to leverage change amongst resistant companies like Exxon. They asked fellow Exxon shareholders to vote against all existing Exxon directors at Wednesday’s annual meeting.

Of particular concern, is that Exxon competitors are creating effective climate action game plans that curb carbon emissions for this notoriously irresponsible industry. For example:

Will the dawning of Wednesday May 29, 2019, when Exxon finds itself with their back against the wall in Houston, TX, prove to be the much needed turning point for the US fossil fuel mega corporations, who have been the main drivers in global warming across the globe for more than three decades? We’ll soon find out. 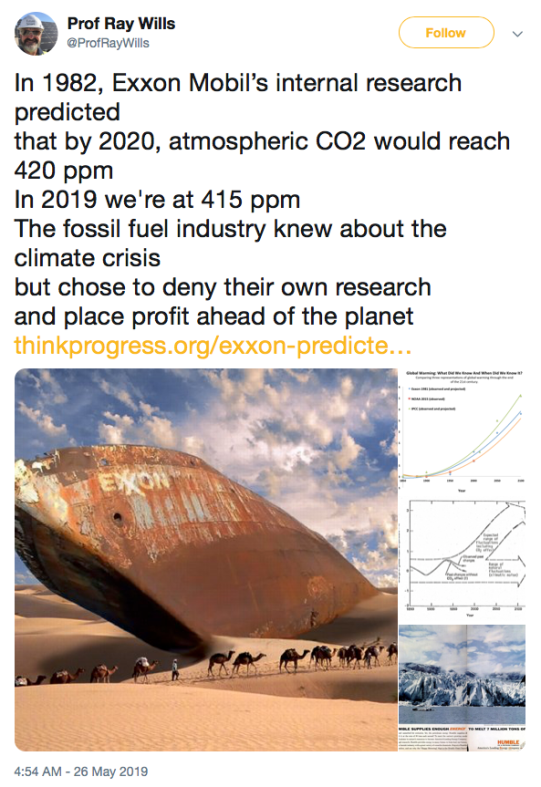